Broadcast transmission towers bring the world into our homes.  Be it music, internet, cable or satellite TV/radio, all network programming originates from terrestrial or earth-based broadcast towers.  And these towers are under attack!

Guyed towers, at right, are held upright by a series of cables providing lateral support, with steel shafts connecting these cables to deeply buried anchor blocks. This system works to balance these incredibly tall, yet slender structures. See figure below on left. 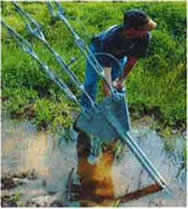 The structure itself is easily inspected for damage and maintenance issues.  Unfortunately, the anchor shafts are buried several feet underground, creating a real problem for tower inspectors.  Over time, corrosion, or rust, begins to attack and erode the steel shafts, compromising the stability of the tower.

The corrosion process begins when a refined metal attempts

to ‘un-refine’ itself, due to the electro-chemical reaction taking place.  The failed tower, shown at right, is the result of a corroded anchor shaft.  The picture within the picture is a close-up of the corroded shaft.

Corrosion of an anchor shaft is the result of an electrochemical process or galvanic action, causing metal to deteriorate.  A galvanic cell requires five elements: 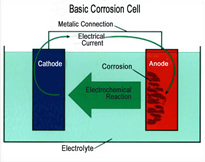 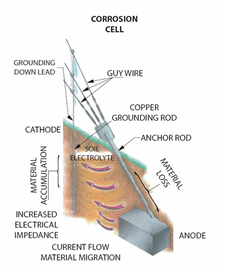 The Corrosion Cell as seen above illustrates how an electrical current is created between the copper grounding system and the galvanized anchor shaft.  The same process starts our automobile every morning.  Current flow causes material migrates.  In a controlled environment this would be termed “electro-plating”.  In uncontrolled environment, this galvanic corrosion proves extremely detrimental to the anchor shaft integration.

The following two examples depict how a continuous piece of metal may be affected by different soil types or the difference between the soil and the concrete anchor block as seen below. 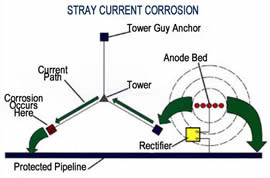 electrical current.  This phenomenon may occur when a corrosion-protected pipeline is in close proximity to tower anchors.  Electrical current is artificially induced into an anode bed which, in turn, sacrifices to the pipeline, in an effort to prevent one area of the pipeline from sacrificing to another area of the same pipeline.  See diagram, right.  Problems arise when the ground current is induced into the tower system.  The current is received at one anchor and conducted through the metal guy wires to a second anchor.  The second anchor shaft sacrifices to the pipeline, resulting in failure of the tower.  Remember, with current flow so goes material migration.  Unless an alternate electrical pathway is offered, corrosion can be prevented by electrically connecting, via wire, the second anchor to the pipeline.

Galvanic and Electrolytic corrosion can be avoided by disrupting the electrical circuit.  Insulating the shaft from its environment using a concrete collar is a proven method of accomplishing this.  See Figure to the right.

The polarity, or direction, of the current may also be reversed.  Replacing the typical copper grounding system with a metal higher in the Galvanic Series is the solution.  See Figure below. 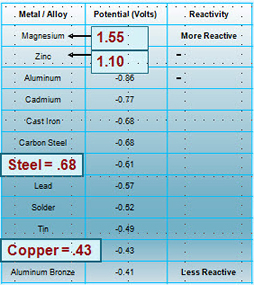 A “passive” anode grounding system composed of Zinc or Magnesium will reverse the polarity of the galvanic cell.  When the soil becomes sufficiently conductive to permit electrical current to flow, the anode system will sacrifice to the anchor shaft, thus preventing destructive material migration.

This system is more cost-effective than the “active” anode systems used to protect pipelines, and less costly than encasing the anchor shafts in concrete or other isolative material.  The anode system can easily be monitored for current flow in the correct direction and easily replaced when the anode becomes depleted.

Recent innovations like the anode grounding system, shown below, are another example of combining different engineering disciplines to protect the commercial broadcast system and ‘keep the music playing’ for your enjoyment! 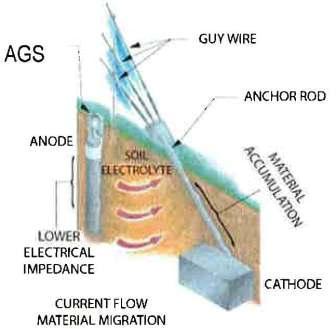 David Davies is a partner with CEI: Consolidated Engineering, Inc., an engineering consulting firm specializing in the broadcast tower industry.  Earning degrees in both Civil and Mining Engineering, he’s a 28-year veteran of the tower industry.  He is a member of the Society of Broadcast Engineers and the TIA/EIA Design Standard Committee and authored the Electrical Grounding and Corrosion chapter of the current code.