Each year, the Society of Broadcast Engineers, the association for broadcast and multimedia technology professionals, conducts a member recruitment drive. The drive calls on current SBE members to encourage their non-member colleagues to join the association. This year, 68 individual members were recruited. 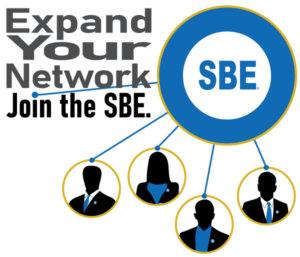 The SBE Membership Drive ran from March 1 until May 31. As a recruiting incentive to members, the SBE asks for prize donations from SBE sustaining member companies. In addition, the recruiter will earn $5 per new member (up to $25) off his or her 2023 membership dues. 11 sustaining member companies plus the SBE provided prizes this year, ranging from shirts and hats to broadcast equipment. The SBE donated logo items, a copy of CertPreview, and a free Webinars by SBE registration. The theme for the 2022 drive was Expand Your Network.

All the recruiters were eligible for the Membership Drive Grand Prize: A trip the SBE National Meeting this fall. (A cash prize option is available if the winner is not able to travel to the SBE National Meeting.) That meeting will be held during the 2022 SBE 22 Broadcast & Technology Expo in Liverpool, NY. The Grand Prize winner this year is Jack Conway of Cox Media Group, Owasso, OK.

The SBE thanks the sustaining members who provided prizes: Blackmagic Design, Broadcasters General Store, Davicom, Heartland Video Systems, latakoo, LBA, Orban, Shively Labs, Sutro Tower, Telos Alliance, and Tieline. The list of prizes and the winning recruiters will be published in the August 2022 issue of The Signal, the SBE’s bi-monthly newsletter, and on the SBE website.

The close of the drive resulted in 68 new recruited individual members, who were sponsored by 61 current members. The recruiters represent 32 different SBE chapters.