The purpose of this course is to give students an introduction and overview of the Simple Network Management Protocol (SNMP). With IP networking becoming an ever-increasing part of a broadcast engineer’s environment, there is an opportunity to exploit this legacy IT protocol for our benefit. SNMP is a way to monitor data points and control different functions in remote equipment, using an existing IP network. Much of the latest generation broadcast equipment supports this protocol, and facility control devices are appearing on the market that can incorporate data and control functions obtained via SNMP alongside information and controls that use traditional hardwired inputs and outputs.

This course will offer a basic description of how SNMP works – the structure and types of SNMP messages, how they are transported over the network, and how they can be used to monitor and control remote equipment. We will then explore the data that the distant equipment might return, and how best to integrate that into an overall facility control plan. And finally we will discuss the types of equipment that support SNMP communications, and also cover the topic of using the protocol for site-to-site communications. 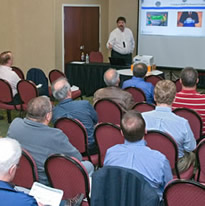 This course was written for SBE by Tony Peterle, CSRE. Peterle grew up in Central Ohio and began taking things apart at an early age to find out how they worked. Fortunately for his parents’ sanity, he quickly learned how to put things back together, and graduated from the College of Wooster in 1981. He has been involved in radio broadcasting continuously since high school, working in Ohio, Kansas, Hawaii and Washington, both on air and engineering. Peterle has held chief engineer positions in Honolulu, Kansas City, and Wichita. After attaining his commercial pilot’s license, Peterle spent several years as a traffic reporter in Kansas City, Honolulu and Seattle before receiving CSRE certification from the SBE in 2005. Shortly thereafter, he came to work for Audemat, and enjoys helping customers solve problems, traveling, contributing to the design of new products, and seeing familiar faces at NAB and SBE events.

The completion of a course through SBE University qualifies for 1 credit, identified under Category I of the Recertification Schedule for SBE Certifications.

To register for the course, click on the link below. You may register using VISA, MasterCard or American Express.