At the 2022 NAB Show, the Society of Broadcast Engineers presented the SBE John H. Battison Award for Lifetime Achievement, which recognizes and pays tribute to individuals for their dedication, lifelong achievement and outstanding contribution to broadcast engineering. Nominees are SBE members in good standing and have been active for 40 years or more in the broadcast engineering industry or a closely allied field that benefits broadcast engineering. Nominations can be made by any member of the SBE and will include the endorsement of three other SBE members. There is no more than one recipient per calendar year. The recipient for 2022 is E. Martin (Marty) Faubell.

Marty retired in December 2020 from the position of vice president, engineering, for Hearst Television, in charge of the engineering operations and staffs for 33 TV stations. In this role, he provided the technical leadership from analog television through the introduction of ATSC 3.0. This encompassed the transition to digital television (DTV), high definition television (HDTV), as well as the spectrum repack. He also innovated the use of dedicated satellite access for enhanced newsgathering and content-sharing between the company’s stations. He moved the company from tape-based newsgathering to digital acquisition and non-linear editing. He moved master control operations to a non-linear server-based environment. He helped create a central distribution center for content with other station groups.

In addition, he has been an advocate for the needs of the television industry. This includes taking a stand for the broadcasters as various spectrum encroachments affected the industry, working to help develop common standards, and mentoring and growing engineering talent throughout the industry.

Faubell moved to the corporate headquarters of Hearst Television as vice president in 1997. Previously, he became the director of engineering for WTAE-TV in 1987, the company’s Pittsburgh, PA, station, where he supervised the introduction of numerous technological advancements including robotic cameras, satellite newsgathering resources and master control automation.

From 1981 to 1987, he was assistant chief engineer at WPIX-TV, New York City, and before that he was engineering maintenance supervisor at WRAL-TV, in Raleigh, NC. 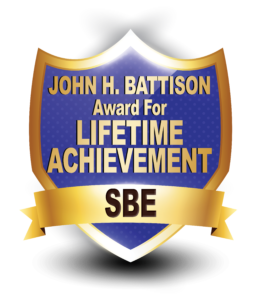 A native of Cherry Hill, NJ, Faubell holds a Bachelor of Science degree in broadcast engineering and a master’s degree in broadcast management, both from Bob Jones University in Greenville, SC. He is a Life Member of the Society of Broadcast Engineers, first joining in 1995, and was a long-time member of the Society of Motion Picture and TV Engineers.
In the nominations, one endorsement noted that when he first met Marty, he, “Was impressed with [Marty’s] knowledge of digital television and broadcasting in general. He knew all facets of television and radio broadcasting from the top of the antenna to information technology, business applications, accounting, building construction and management.”

Another nomination noted, “I am in awe of the amount of knowledge Marty has that he shared with me and my peers at Hearst Television. If Marty did not have an answer right at hand, he made sure he followed up with you. He taught us lessons in the most caring and constructive manner. He showed you that he wanted you to succeed. He was an advocate for broadcast television and the needs of his stations.”

On the announcement, SBE President Andrea Cummis, CBT, CTO, said, “Marty exemplifies the ideal candidate to receive the SBE’s John H. Battison Award. His dedication to, knowledge of and skills in broadcast engineering extend beyond the benchmarks of bestowing this honor.”

More information about the award is online: sbe.org/lifetime